10 ramen recipes to crank up your cravings

The Japanese noodle soup that’s like a hug in a bowl.

Ramen: if ever there was a dish to bring on the comfort factor, it would be this. A noodle soup that’s widely popular in Japan and throughout the world, ramen is one bowl of goodness you need to get in on. But what exactly is in it?

It’s all about the broth, my friends. The most popular style is called shoyu ramen, which has a chicken broth base and owes its flavour to soy sauce. Then you have miso ramen, which is thicker and richer thanks to the miso paste flavouring, and tonkotsu, which uses pork bones as its flavour base which gives you a lovely creamy, meaty broth. I also love tantanmen, which is almost like the Japanese take on dan dan noodles.

Obviously the noodles are a large component of ramen (thin and curly or thick and straight), but in my opinion it’s the toppings that maketh the dish. Braised meats, jammy boiled eggs, fresh spring onions, fried chicken, corn… even dumplings! Check out my selection of recipes below and see which one speaks your name the most.

Love noodle soup? Then you’ll want my recipe for a flavourful, restaurant-style homemade Japanese shoyu ramen! This delightful chicken ramen soup broth is so jam-packed with umami goodness that you’ll want the whole pot to yourself. I like to serve it with my homemade chashu pork belly, but you can add any protein of your choice. For a clear broth, be sure to use a gentle simmer and scoop off any froth throughout the cooking.

Birria tacos may have been taking your socials by storm, so let’s go one step further and add the king of carbs: noodles! This birria recipe sees the Mexican spiced and braised beef soup enjoy a few Japanese-style twists at the end. The best beef ramen soup recipe ever. You’ll want in, trust.

That’s it: from now on, I’m always saving my leftover ham from special occasions to upgrade my instant ramen stock. This is an ingenious way to get maximum flavour from something you’d probably normally just discard. Life-changing, you guys. Get amongst it!

When Thai laab salad met noodles… you guys, this is the love child of champions! Fiery, porky goodness, fresh herbs and bouncy noodles: what a combo.

Turn the convenience of instant ramen noodles into a next-level amazing pasta dish to get those tastebuds singing. Luscious, lemony and luxe, luxe, luxe!

Noodles, spicy pork, a rich creamy broth… you guys, this ramen dish is ALL the things. Bonus points for being surprisingly simple to make, too.

Get ready for an epic ramen broth that’s a lot quicker than you think to rustle up, yet packs in serious flavour and richness. Yep, this express version of Japanese ramen noodle soup ticks all the boxes… and it’s got dumplings! Everything you need, in one bowl of goodness. 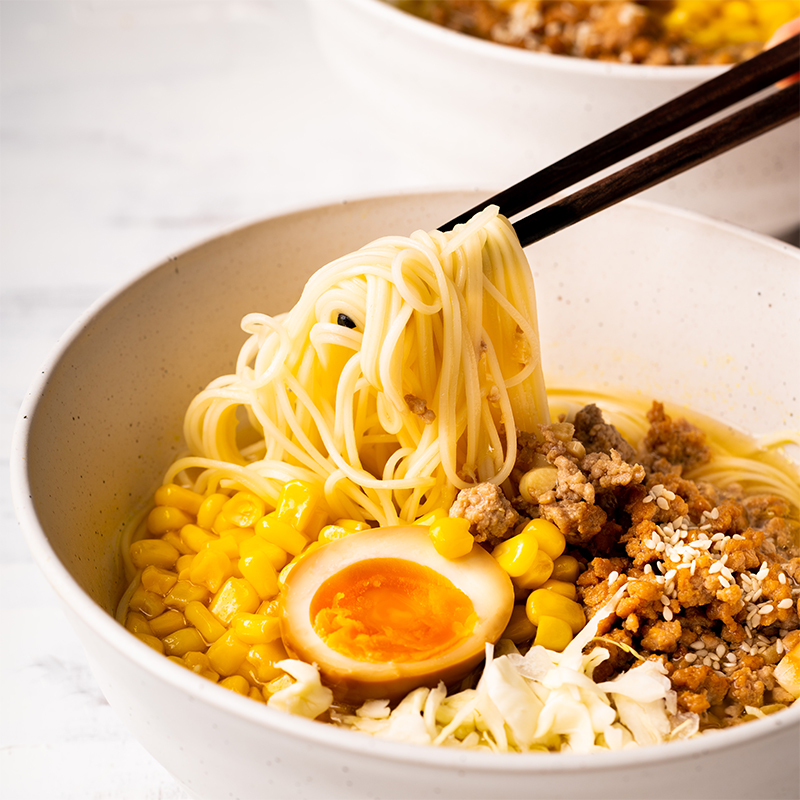 My quick ramen recipe cooks in just 15 minutes, using pork mince and already cooked ramen noodles. For my ramen I’ve made a miso tare – white miso blended with mirin, garlic and ginger. This one has such an epic flavour, yet it’s so quick to make.

I love spicy noodles at the best of times, but holy smokes – these are everything a person could wish for! This shortcut ramen keeps the cook time low but the flavour is full-on high. Stick with darker chicken meat to keep things succulent and juicy.

Could this be one of my best ramen recipes ever? Noodles, broth, dumplings, egg… these are a few of my favourite things, and I reckon you’re going to love them all together! A super-speedy soup that brings it all home.

The ultimate guide to peppercorns

How to cook rice: 3 steps to success